Hitex and Willert have jointly adapted the code generation of the IBM Rational Rhapsody modeling tool to Infineon's AURIX multicore architecture and optimized it to directly generate production code from UML models. Apart from efficiency and deterministic time behavior, the benefits include that the generated code is understandable, MISRA compliant, and certifiable. It is also possible to debug the models with the code running on the target hardware. 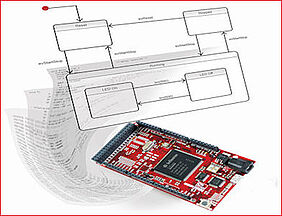 The major advantage of model-driven engineering is that the model generates the single source of truth (SSoT or SPoT for single point of truth). From the specification, the model is incrementally developed until fully implemented. During this process, the model fulfills various functions: it serves as documentation and provides the basis for the definition of link relationships and traceability analyzes, and enables finding errors on the basis of early-stage simulation.

In this way completeness and maturity of the model grow continuously. The source is always the model and thus it is only logical that in the end also the production code is generated from the model. Production code generation makes great demands on the generator regarding the optimization of resources (run time, memory), comprehensibility and quality (MISRA) of the generated code.